The proposed work, The Cutting Room Project: The Suit as Method and Mode – Decolonising Sites of Making and the Material Constructions of Identity responds to Ilze Wolffâ€™s book titled, â€˜Unstitching Rex Trueformâ€™ in which she analyses the impact on class, race and gender through the modernistic architecture of the Rex Trueform garment manufacturing factory in Salt River, Cape Town. This response follows on from my own research, which I (Lesiba Mabitsela) conducted for my MA dissertation in Theatre and Performance titled, â€˜Performing Methods of Undress towards Re-Imagining African Masculine Identitiesâ€™. My research primarily interrogated and critiqued the colonialist irony of contemporary African masculinities and their forms of performative representation. Both in its design and cultural symbolism, â€˜the three-piece suitâ€™ addresses many of the same entanglements that Wolffâ€™s research identified in the construction of the Rex Trueform building. The Rex Trueform three-piece suit, known as one of quality, sophistication and good reputation, ties these two â€˜objectsâ€™ together â€“ both imbued with divisive notions of race, gender and class. The proposed work explores these entanglements through academic study, performative interventions, and the production of a micro-capsule collection, contributing towards new digital archives for forgotten stories and redress-ed possibilities.

The collaboration between Wolff Architects and Lesiba Mabitsela Studios (supported by the African Fashion Research Institute) brings the critique of dress and its wearing (in this case, the suit) into dialogue with a critique of the site of its making (in this case Rex Trueform as a heritage site in-the-making), and will contribute to each research field by drawing fashion theory, performance theory and architecture together through a collaboration with Wolff Architects and volunteering staff members from the Institute for Creative Arts (ICA).

I had thought to create a conversation between the construction of the common suit and its site of making – using both my MA thesis around the links between the performance of African masculinities, the common suit and then by extension, Ilze Wolffs research into Rex Trueform. The title of the project is as follows: The Cutting Room Project – The Suit as Method and Mode: Decolonising Sites of Making and the Material Construction of Identity.

I had been thinking and conceptualising this project some five years ago (time goes so fast), where I had thought to create a documentary of Cape Town’s former clothing sector after conversations with the staff known as the ‘ladies’, as we had affectionately called them whilst working for renowned fashion designer Gavin Rajah. I have now been afforded the opportunity to re imagine this idea as an interactive digital experience since being accepted as an ICA Virtual Fellow for the year 2020.

We collected 2nd hand Rex Trueform suits from around the country to repurpose, unstitch, cut and transform into new looks for a modern audience due to not being granted the opportunity to conduct the intervention within the Rex Trueform heritage site.

The resulting micro range was produced by a capable team of friends and collaborators marking the beginning of a virtual residency at Wolff Architects.

The music was chosen with the intention of creating a sonic snapshot of a moment I experienced whilst producing garments as a young junior assistant at Gavin Rajah Atelier where El DeBargeâ€™s, â€˜Heart, Mind & Soul (1994)â€™Â  would play endlessly over the radio.

This experience allowed me the freedom to speculate on what music may have been popular enough to play over the radio throughout the years that Rex Trueform had been operating, capturing process and mood alongside theÂ  lived experiences of the people who worked for the Rex Trueform family.

The chosen music are original covers sung in acapella and produced in collaboration with Johannesburg based recording artist Estelle â€œMoulanâ€ Jacobs:

This response follows on from my own research, which I (Lesiba Mabitsela) conducted for my MA dissertation in Theatre and Performance titled, â€˜Performing Methods of Undress towards Re-Imagining African Masculine Identitiesâ€™. My research primarily interrogated and critiqued the colonialist irony of contemporary African masculinities and their forms of performative representation. The research laid the groundwork for what would become ‘Reinstitute’ â€“ a performance intervention performed as part of a group exhibition hosted by the Zeitz Museum of Contemporary Art Africa titled â€˜The Main Complaintâ€™, curated by Michaela Limberis of Art Meets TV. The performance explores how the use of drapery in clothing design could be defined as a method of resistance in an attempt to re-imagine the common suit. The performance intervention aimed to identify and disrupt the image of corporate and/or cultural African institutions that follow a strict eurocentric â€˜formalâ€™ dress code (i.e. suits and ties), highlighting the ironies within African institutionalism. The second goal would be to alter an ideological and conceptual shift in how suits are designed, constructed and therefore presented. The third goal would be to inspire collective and democratic participation across existing hierarchies within institutions to re-imagine what an African institution can look like as an act of decolonisation in â€˜the everydayâ€™ through clothing. 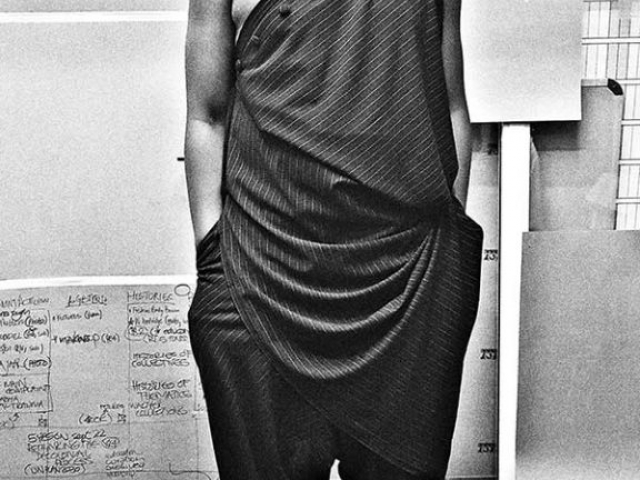 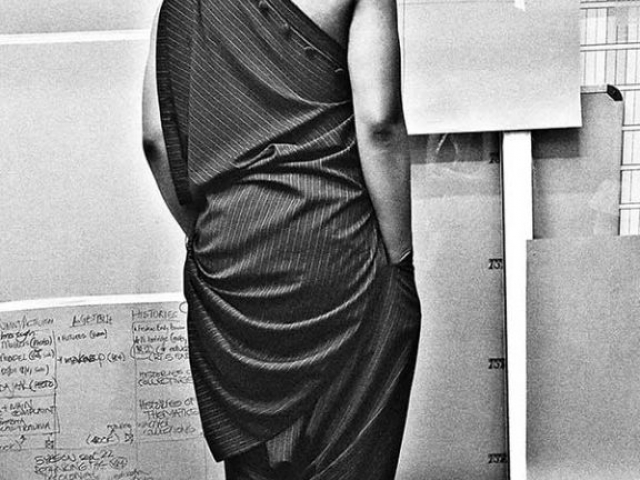 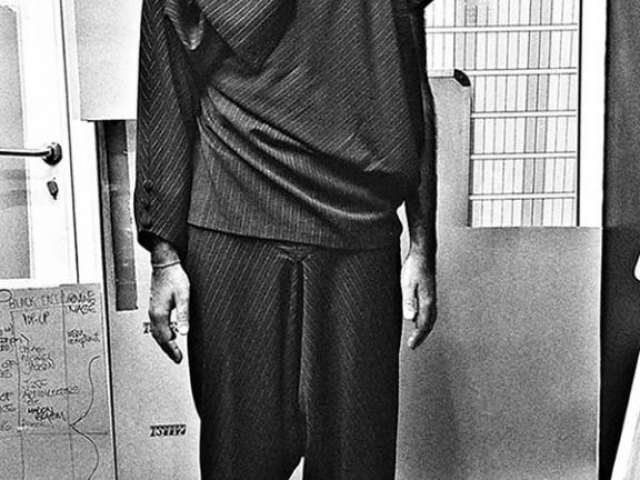 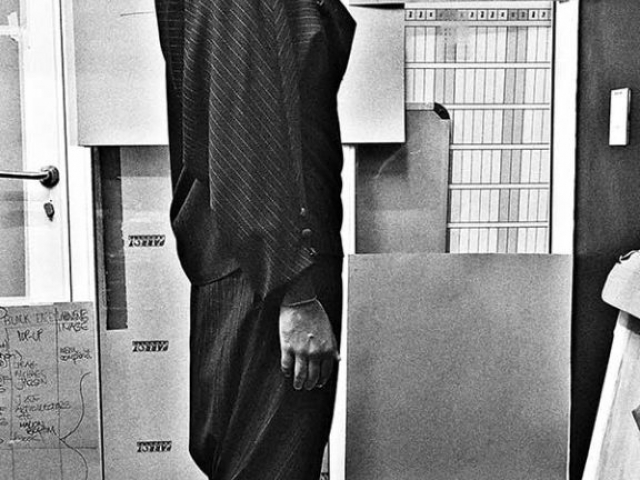 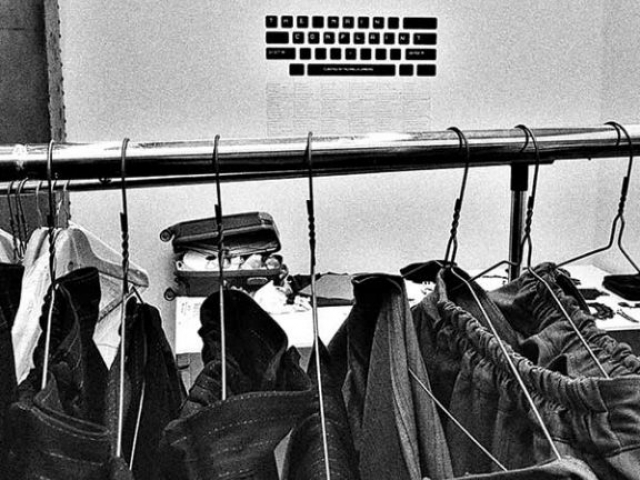 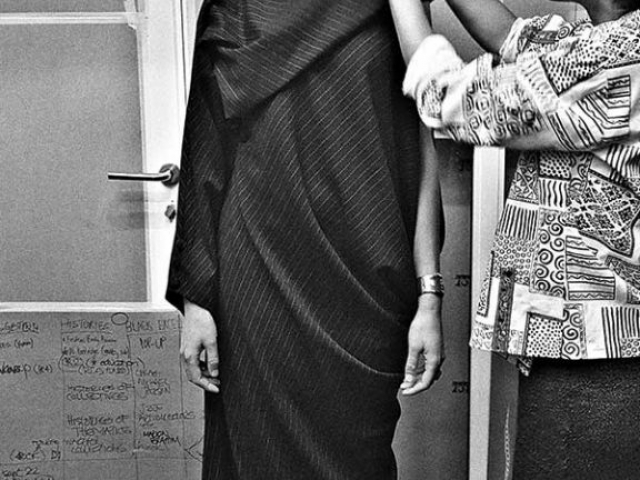 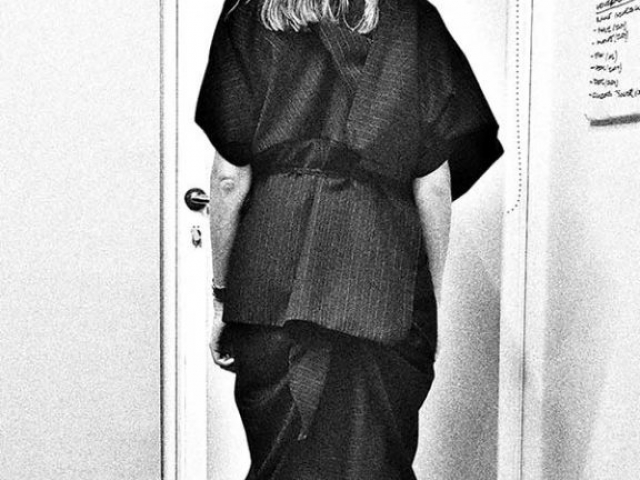 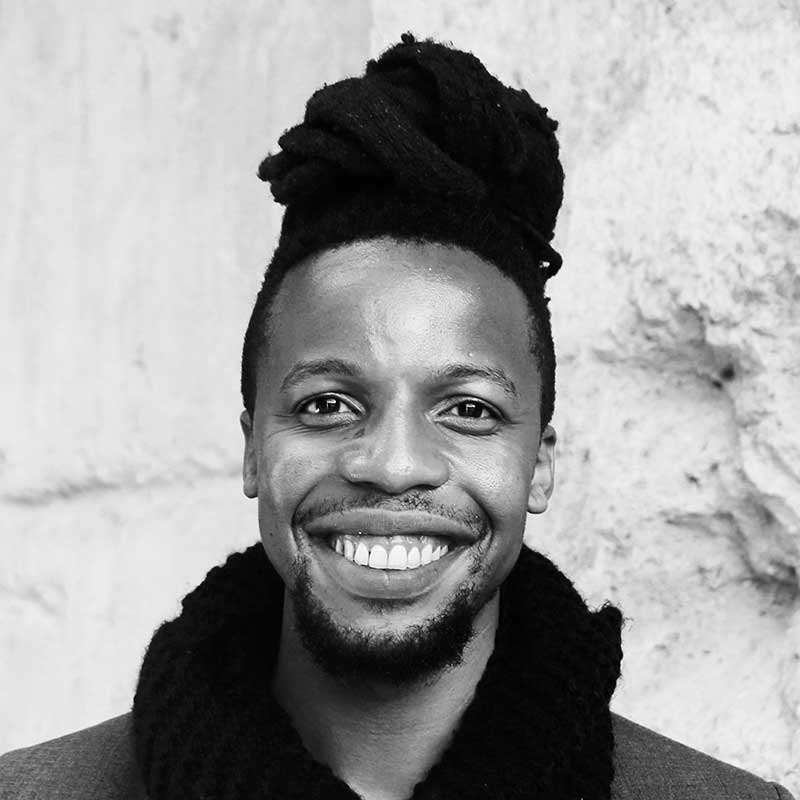 Lesiba Mabitsela is a South African artist and fashion practitioner who uses performance, video, textiles, and immersive technology to explore a concept or feeling expressed by what he terms ‘cultural homelessness’. The themes most prevalent in his work critique post-colonial perceptions of â€˜blacknessâ€™, masculinities and the symbolic underpinnings of Western beauty and aesthetics.