What I can do is tell a story, a story of my own black contemporary futures â€“ one that has not been demoralised by White Systemic language and Violence. My works seek to re-imagine what it means to be Black and Powerful and Magical and Beautiful and Sacred and Ethereal and Super Transformed abled beings. This Conversation encapsulates my previous works in that it is the virtual expression of PINA (2018/9,Â  a dance work in three parts, and Indabuko, a visual film shot in Kwa Zulu Natal (2014). Both of these works have travelled to Sweden, Amsterdam, Rotterdam, Ghana, Mozambique and South Africa over the last 5 years. In this Fellowship, I hope to achieve a more appealing populous language of Black Queer both on virtual and non-virtual platforms â€“ language that is less discriminatory, apologetic, empathic but more universal; utopias in structure and more magical in nature.

PINA was the first iteration of this exploration. Here, we looked into the dismantling of systems of power and it became a purge into what can be new. The choice of place, on the parapet of the historically laden Castle of Good Hope, the narrow bricked space, a liminal edge, and the iconic Table Mountain silhouetted in dramatic pink evening light â€“ a powerful backdrop to a very intimate and unexpected performance piece. At first the viewer is surprised by the sculptural and evocative visuals; the use of brightly coloured plastic pegs as face markers, fan-like, framing the face in a strangely masked identity filled with the pathos of an ambivalent minstrel. Upon the shaven head, a surreal mammalian tongue is precariously balanced, creating a tension between the head and shoulders and the body. Everything is poised and strained in a beautifully crumpled suit, waiting to be moved deeply from within. The dance performed a journey of embodiment that provokes a deeply rooted and silent question of, â€œwhat do you see, when you see me?â€ The rawness and universality of PINA explores the historical and internalized trauma of the black masculine body and the possibilities of the many awakening personae that lie deeply within that body. The piece examines some of these possibilities through a range of precise, detailed gestures and innovative choreography. The witness is left in awe of what the body can endure, and how we are all complicit in its history. 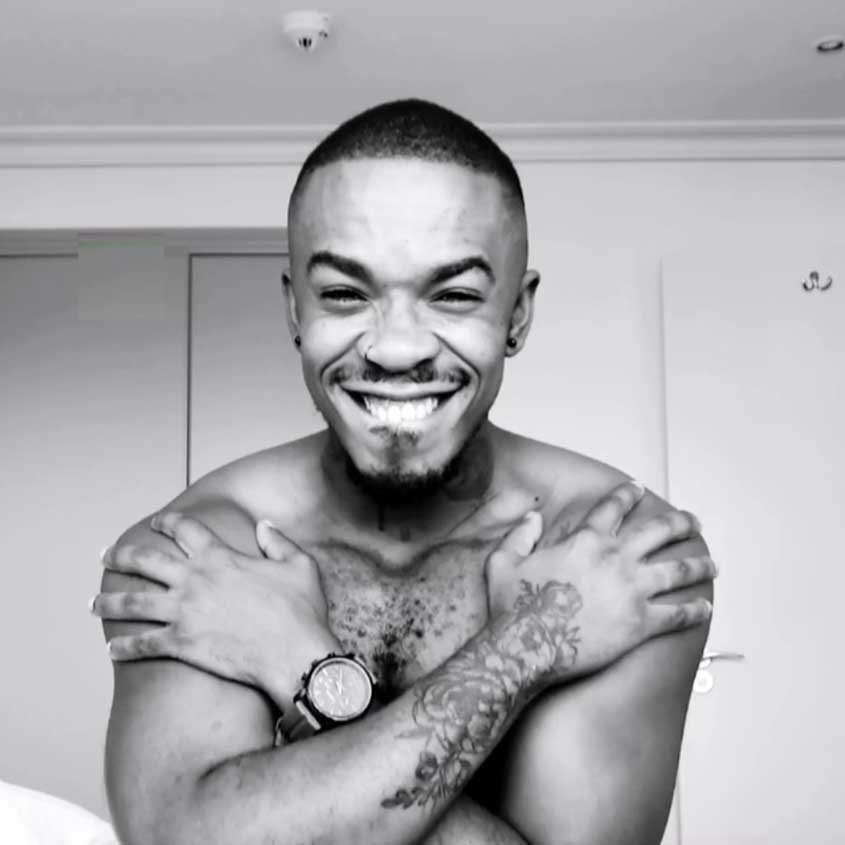 Born in 1990, Kwanele Finch Thusi began working extensively in contemporary dance and dance teaching in 2013. As a teacher, entrepreneur, and director, Kwanele Finch Thusi has created an innovative and inspiring body of work and workshops, and has performed in numerous local and international festivals. In 2014, he developed a series of workshop sessions and dance knowledge classes called Moving Bodies which have reached over 1500 students and performers.

Since 2015, he has been in collaboration with the Forgotten Angle Theatre Collaborative (Mpumalanga) and The Drama For Life Company in Johannesburg, teaching, mentoring and creating solo works for festivals such as AfroVibes (2017), My Body My Space (2016) and a recent collaboration titled AfriQueer (2016) directed by Warren Nebe which was performed in Botswana and then reworked for the National Arts Festival where the production was awarded the 2016 Adelaide Tambo Award for Human Rights. With the Forgotten Angle Theatre, Finch has been part of community art development in under-resourced facilities in Limpopo, Polokwane, and Bloemfontein.

Finch founded the Kwanele Global Collective (KGC) for contemporary dance, theatre, and music, which he runs currently. KGC is a growing association of 40 members connecting across Europe and beyond, which aims to strengthen professional practice through developing audiences and public engagement, as well as to expand creative collaborations and empower serial creativity.

Finch is also the lead Movement Coach for a new Dance Series that is in partnership with Netflix and Blue ice Productions based in Cape Town.