This online artwork offers voice for public memory, witness, and queer love. It draws together histories that matter which appear disparate, but are connected and equally important. Those of Sarah Baartman and Uyinene Mrwetyana in the Cape, an ant in KwaZulu-Natal, the Alp mountains and sky in Europe – and Two Boy Ogres with an Old River Bird, everywhere.Â Â

It is a story of queer and feminist trust, writing for us that neither is free without the other, each of us is bound to each other. It shows the only footage of the de-lettering of Jameson/Sarah Baartman/Uyinene Memorial Hall at the University of Cape Town, submitting it for public memory, yet issued with a charge: for you to hear, and hold, the power of queer love. I wrote this story of Two Boy Ogres and an Old Bird, which holds the voice of these histories, and futures, together. It is an offering to keep coming back to – this story of queer and feminist politics – as we work to understanding endings of violence, and the insistent continued turns to beauty, freedom and love. It is perhaps Gayatri Spivakâ€™s â€˜double bindâ€™, told in a different wayâ€¦

On the 31st of August and 1st of September 2019, the University of Cape Town removed the letters of JAMESON MEMORIAL HALL from the newly coined Sarah Baartman Hall. They did this in secret, in private, when most students where away from campus during the spring week vacation. They did this actively excluding the public from participating in this historic moment, when the world could bear witness to the fall of Jameson – a direct result of the Rhodes Must Fall movement. They did this despite my and othersâ€™ efforts to ensure that they include the many publics in the region – the university community – in a moment that is about their own histories and futures. The publics have a right to participate in their own History. There were no official cameras or ceremonies to document this moment, or even record for the archive – the unarchived donâ€™t get to be burned up when a relentlessly fought-over mountain with its ancient fires merely breathes. It was a secret privilege afforded to the reigning patriarchâ€™s prince – Jameson of Rhodesian of Imperial commands – that he be allowed to crumble in private, that his broken letters and dismantled body not be witnessed by the victorious who have earned this right, when he is to be removed, when he ought to bear the responsibility of accepting humiliation, to see their legacy fall.

In the days preceding this de-lettering of Sarah Baartman – officiated only in the universityâ€™s rolled-out discourse, but with no ceremonies to heal her memories, to deexhibition-ize and demuseum-ize her history – Uyinene Mrwetyana was desperately missing. On the 2nd of September, the Monday when students returned for their final term, the news that she was murdered had cut the morning and day, and would cut the weeks that followed – the original sin had repeated itself in the contemporary, she was raped before she was murdered. She was not the only one. She was not the only one. It cut the students and communities such that these days saw the greatest gatherings on the plaza steps since the Fallist seas of people who stood and protested for Rhodes and Fees to Fall, in all their many meanings. The week saw a pop-up Assembly where Gender-Based Violence embodied trauma, protest, podiums, marches, and one of the biggest protest-gatherings at the Cape Town Parliament.

But these moments of the de-lettering of Sarah Baartmanâ€™s memory, spirit and symbolic body and the total and rippling destruction upon Uyinene Mrwetyana, were not connected publicly, and the people were disallowed to fully grieve, to connect the hundreds of years that thread the social reproduction of rape and murder upon women, queers, childs, and other targeted peoples. The scratchy ugly defiled absence where JAMESON MEMORIAL HALL could still be read – was made to be rapidly covered up in brown paint, but his traces remained. They still remain now, under the newly printed letters of SARAH BAARTMAN HALL. To call it a palimpsest is to too generous. It is more like a fowlâ€™s scratch in the dirt, with new names chained to an old ghostly body, still, without ceremony. Her name too, was erected in secret, made to parade one Monday morning for anyone who wouldnâ€™t care.

As a filmmaker and student who came upon this moment, and an activist bound to this moment, I documented, I archived, I caught UCT â€˜blood-handedâ€™ at its attempt to erase the humiliating Fall of Jameson, from the public record, memory, and archive. See my Instagram post from that day here on my account â€œ@vikram.kerâ€.Â

This work then draws on my photographic and video archive – the only film footage to timelapse the de-lettering of Sarah Baartman Hall. I was also there when the Uyinene Mrwetyana protests of mourning took the campus from the 2 September, coming out an African Studies class I taught on public memory. I flew over Saartjieâ€™s mountains. I witnessed an ant witnessing me. Here, I use my skills as filmmaker to create an online experience that seeks to re/create a ceremony to honour these histories that matter, and interrupt the gaps of silence that animate public memory and archive.

This work is based on a creative reimagining of a live art performance I did in 2019 entitled Critical Intimacy and Oceans, in the Grave of a Tree, for the Institute for Creative Artâ€™s ProHelvetia Live Art Performances, where they killed a tree, an old and ancient witness, an elder. With no warning, with no public announcement, with no public and temporal engagement, no ceremony, no ritual, no permission, no consent. Did they ask the Tree what it wants? Did they ask us? Like that ritual on heritage, loss, memory and queer love at that particular tree, this reimagining takes up the Institute for Creative Artâ€™s productive call to ask, what is live online performative art?Â

The work is inspired by the kernel and core themes in my â€œCritical intimacyâ€ piece, which is inspired by the Black Radical Tradition work of Sylvia Wynter. Specifically: her concept that ceremonies must be found, made and performed that re/pair, heal and grieve and return life to the injustices of the past. It is drawn from her (1983) paper â€œAfter Humanism: The ceremony must be foundâ€ of which the first lines quote â€˜The ceremony must be found, that will wed Desdemona to the huge Moorâ€™, re/calling in/to the archive, Shakespeareâ€™s Othello. This is combined in inspiration with Mandla Mbothweâ€™s â€œConfronting the Colonial Crime Sceneâ€ as it was performed in 2018 at the Iziko Museumâ€™s closing of the â€˜Bushman and San exhibit – another silent move by an institution exposed and re/paired into public memory through performative intervention. It seeks to both draw from and create new â€œritual archivesâ€, as African historian Toyin Falola (2017) draws our attention to. 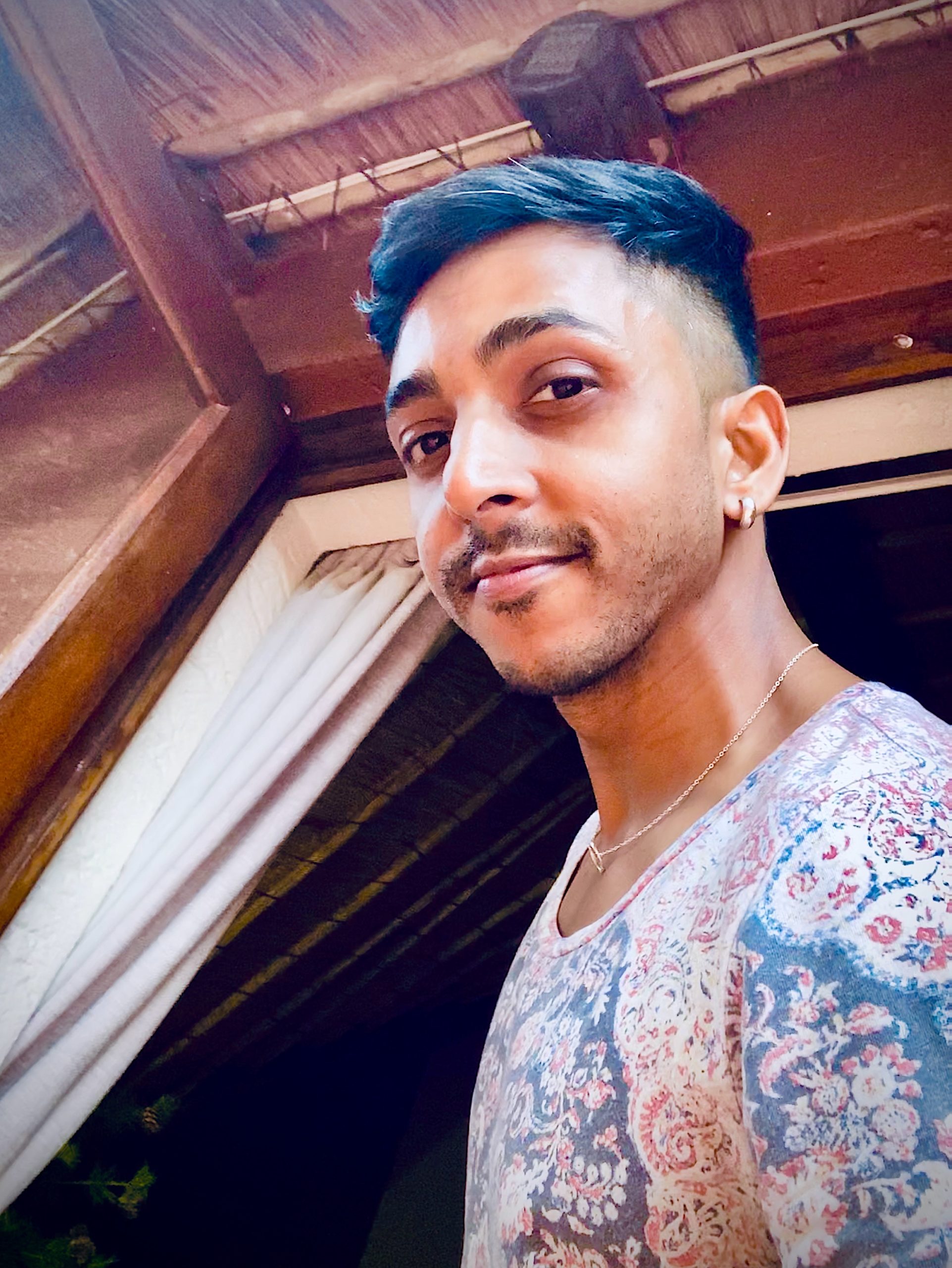 Vikram Kershan Pancham has always been queer. Their work comes through the written, cinematic and performing arts. They began making queer worlds from a young age, through the arts of dance, performance, poetry, drawing and film. Like any other queer faced with the straight imaginaries found at every turn one makes here, she has worked to rewrite and turn the worlds we share – too often laced with violence – towards beauty, style, truth and justful queer now-futures. As Fanon says and perhaps every queer knows, greatness is not found in oneâ€™s acts, but in oneâ€™s style. Our style of creating with fury and water, gentleness and fire, the fierce and the compassionate, softens the hard edges of the world so that queer worlds smile, love and live forever.

In 2017 they wrote a stageplay as a way of reading an archive of Black oral histories spanning 1047 years of lived life, and drew these together with the folk tales of Ganesh, 11th century Sanskrit scriptures and 20th century English comics. Part of this was performed in 2019 for the Institute for Creative Artâ€™s ProHelvetia Live Art Performances, entitled Critical Intimacy and Oceans, in the Grave of a Tree. They also took a BSc. in Computer Science cum laude from the University of KwaZulu-Natal, a BA. and BA. Honours in Motion Picture Writing and Directing from AFDA, The South African School of Motion Picture Medium and Live Performance, and theirs Masters in Philosophy from the University of Cape Town. Their film work has been broadcast locally and internationally, earned awards for Homecoming and this, along with their academic work, has travelled from Durban to New York, Cape Town to Tunis, Nairobi to Amsterdam. They hold fellowships from the South African National Research Foundation, the Andrew W Mellon Foundation, and become a Mandela Rhodes Scholar in 2009.

In the past five years they worked with social, environmental, indigenous and LGBTQ-oriented political movements in South Africa. They have mentored young people who are carving out the difficult transition from matric into the world of work, through initiatives like Harambee, while also advising corporates and government bodies, in order to strengthen pathways between creative arts and performance, research and education, and public knowledge.

They are currently working on a documentary on queer/animist ways of knowing from within the body, enabling trust with our others, in Southern Africa. It is part of their PhD based across the Universities of Edinburgh and Leiden. They bring to their studies seven years of research and teaching experience in African Studies, Gender Studies, Sociology and Anthropology at the University of Cape Town; research experience withÂ the South African BRICS Think TankÂ and theÂ Wits Centre for Critical Diversity Studies; and public service work as the Ethics Coordinator for the Precolonial Catalytical Project ofÂ National Institute for the Humanities and Social Sciences in South Africa, based at theÂ Centre for African Studies at the University of Cape Town.Â